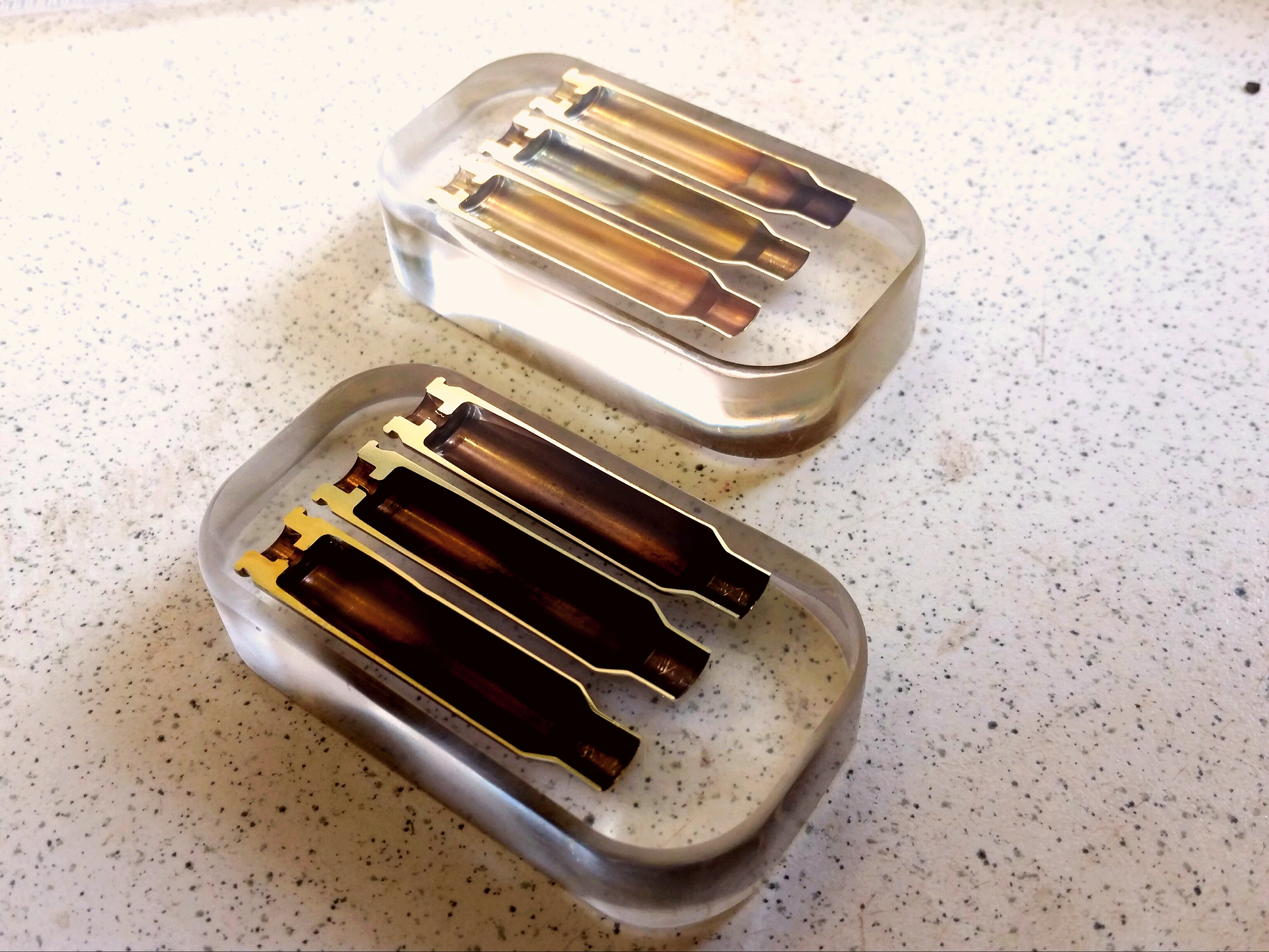 A study by Annealing Made Perfect (AMP)

We would like to thank Mic McPherson and Bill Gravatt for the many hours they have spent reviewing this study and providing editorial assistance.

Our early research started back in 2012. Since then, we have calibrated annealing programs for thousands of cartridge cases, ranging from 17 Hornet through to the large Cheytacs and huge Nitro Expresses. Our cartridge case archive has grown to include scores of brands, lot numbers, wildcats and other variations. The fact that AMP’s induction annealers have both variable time and power, with small increments between power levels, allows very fine control of the finished annealed hardness.

We decided it was time to revisit the metallurgy of what we do to find the empirical evidence (if any) of the benefits of correct cartridge case neck and shoulder annealing. Specifically, is our annealing absolutely repeatable and consistent, and if so, does that result in more consistent "neck tension” for our customers?

We have observed that annealing is now a widely discussed (and sometimes hotly debated) topic. We thought this could be an opportunity to address some of the more common misconceptions. In the process, we even disproved one of our own misconceptions – see Cartridge brass (7) below. We never stop learning.

Our own laboratory facilities are specifically set up to calibrate different cases to the correct annealing program. In order to answer some of our questions, we needed to consult outside metallurgy laboratories. This is an ongoing project.

For the microscopic analysis of brass grain structure and hardness, we are working with Andrew Ouwejan from Metlab Ltd. The Metlab facility allows the longitudinal sectioning of cases to examine every region from case head to mouth.

Andrew has also provided us with an overview of the physical properties of cartridge brass in general. His reports form Appendices 1 and 2 of this paper.

For the analysis of varying neck tensions, hardness and their effects, we are working with Nick Casterton of Air New Zealand Gas Turbines Materials Testing. Using tensile test equipment, we have experimented with different combinations of dies, reloading sequences and neck hardness to ascertain the best practice. Nick’s report can be found in Appendix 3.

For the chemical analysis of the alloys used by different manufacturers, we have used two laboratories. In 2015, we worked with Auckland University of Technology (AUT). AUT is a research facility, but not an accredited laboratory. We have recently cross checked the analyses with Hayes Laboratories, an International Accreditation New Zealand (IANZ) accredited laboratory specializing in non-ferrous metals. The results were quite different, and more in line with accepted copper: zinc ratios of cartridge brass. The UNS C26000 specifications for cartridge brass stipulate a minimum copper content of 68.5%, and a maximum of 71.5%. The Hayes Laboratories report is Appendix 4. The chemical analysis was really of academic interest. When calibrating customer cases, we believe it is the annealed hardness that matters most.

The basics of cartridge brass:

Correct annealing of brass is a function of time and temperature (Appendix 1 - 1.5). Metlab was provided with three samples of virgin Norma 223 Remington cases which were neck-sized to produce neck hardness averaging 135 HV. 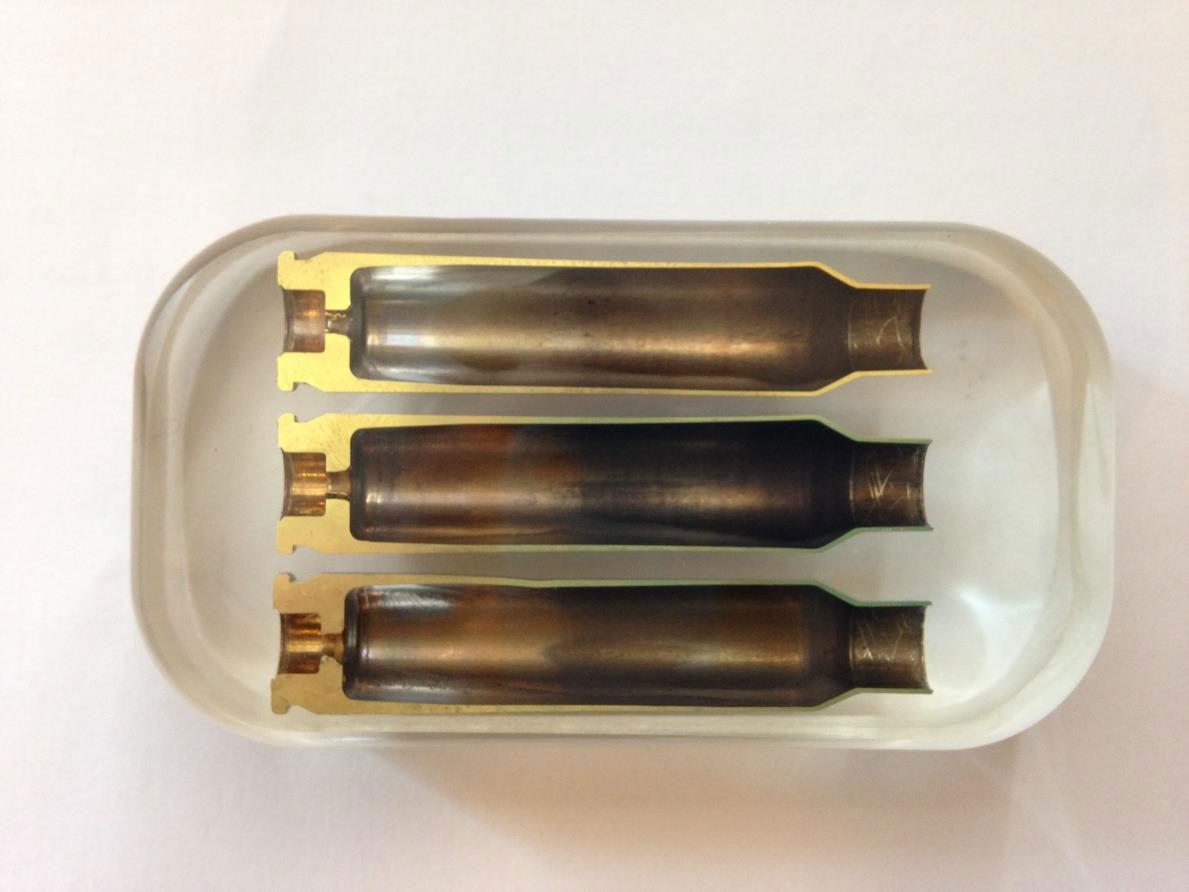 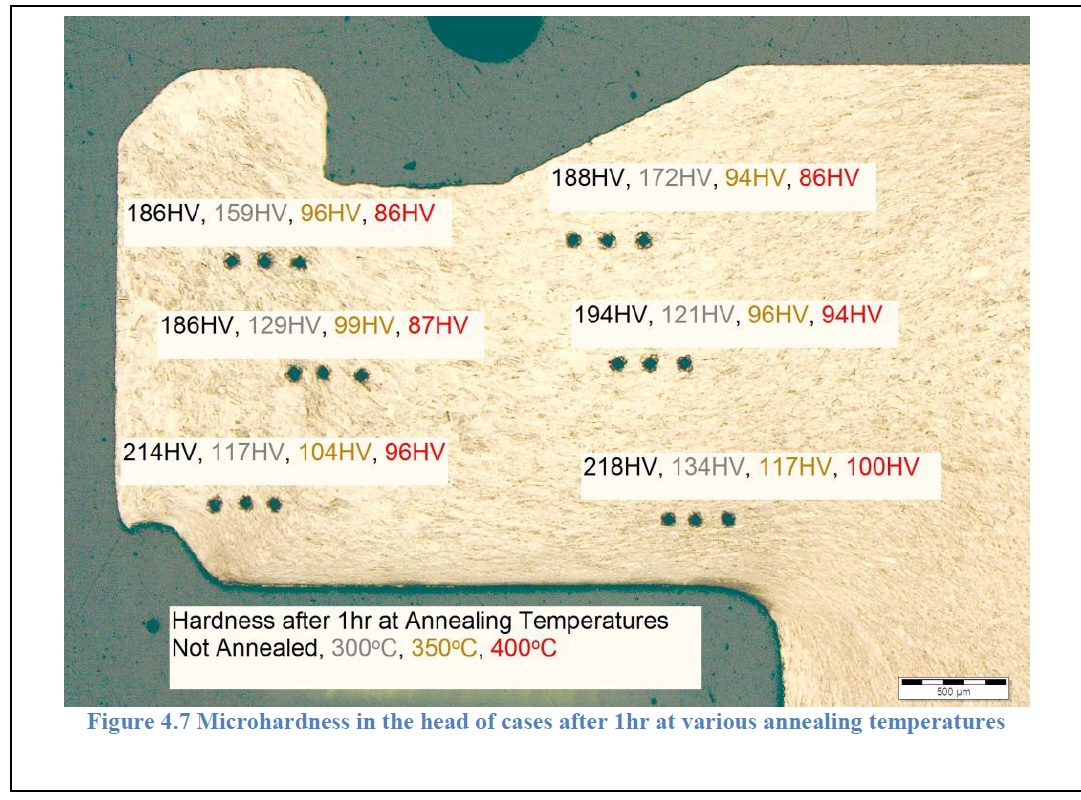 The neck and shoulder regions of cases must be "flash annealed” so that the heating is localised. This requires a higher temperature over a shorter time (Appendix 1 - 1.5).

It is extremely difficult to accurately measure the peak temperature of flash annealing. As noted above, the required temperature also varies with time. That is why AMP focuses on the end result – neck and shoulder hardness – rather than temperature.

Heat migration to the case head:

Correct flash annealing applies just enough heat to the neck, shoulder and 3 – 4 mm of body to achieve annealing. While heat does dissipate over the length of the case, it cools down very rapidly (see graph above). Brass just several millimeters away from the annealed section doesn’t heat up enough to achieve annealing (see Appendix 2 Fig. 7.3 at 17mm from case mouth). Therefore, quenching is unnecessary to prevent heat migration, and adds no metallurgical benefit to the annealing process.

At AMP, our objective is to produce repeatable, consistent neck and shoulder hardness. To test this, we loaded virgin Norma 308 Winchester cases, which we shot, annealed and reloaded ten times. Sizing was done with a bushing die with no expander, producing an interference fit of 0.003”. There was no case cleaning of any description on any cases, right through to the tenth shooting cycle. This is obviously not best practice, and we think that none of our customers would do this. The purpose was to establish a base line for future tests.

Samples were taken for analysis after the third and tenth shots. These were sectioned and tested for grain structure and hardness. The samples were sized before testing. Appendix 2 – Figures 7.0-7.2 (shown below) confirm that the grain structure variation over the entire 10 anneal cycle is virtually undetectable. No contamination of the brass occurred, and the accuracy of the induction annealing was unaffected by lack of cleanliness. Note: the only chemicals present were sizing wax and primer and powder residues. It is possible that some cleaning products could have an effect (see Appendix 1 – 1.6).

The neck and shoulder hardness is virtually identical for both 3x and 10x annealed cases (see Appendix 2 – Figure 7.3 shown above). The two green lines show the hardness of both samples from the case mouth to 13mm (0.512”) past the point of the shoulder (see photo insert in the above graph). Note: for the purposes of this test, only a neck bushing die was used. Therefore, the shoulder region, after fire forming, is relatively unworked.

From the above results, we conclude that over ten cycles there is no discernible grain growth or contraction, and hardness is also consistent load to load. This means that for our future testing and calibration we do not need to routinely focus on grain size or structure. If the correct neck and shoulder hardness is achieved, it will be repeated each cycle.

The purpose of accurate annealing is to produce consistent, repeatable neck and shoulder hardness. Clearly AMP achieves that. It is not really our brief to consider other factors in accuracy, but we feel it is important to our customers that we explore other variables.

The effects of annealing on neck tension

To establish this, we submitted numerous samples for tensile testing, pulling seated bullets from the cases. The results were:

See Appendix 3 for detail. Note the Cartridge Overall Length used means that the bearing surface of the bullet was in contact with the entire inside length of the neck. The pack numbers in the left column above refer to the various samples as supplied to the laboratory.

As can be seen clearly from Packs 2, 7 and 8 (above in yellow and below graphs), actual neck tension is a combination of interference fit and neck hardness. The greater the hardness, the greater the force needed to draw the bullet for a given interference fit. The packs highlighted in yellow were sized with a fairly aggressive neck die with expander ball. That hardens the neck considerably more than the bushing die without expander, and greatly increases the force needed to draw the bullet.

The next issue is the effect of carbon build-up inside the neck. As can be seen clearly in Packs 3, 4 and 5 (highlighted in blue above and below), even with identical interference fit and neck hardness, as the carbon layer increased (microscopically), the force to draw the bullet decreased. It would appear the carbon acted as a lubricant. Interestingly, the standard deviation also improved i.e. the case to case variation in the force required to draw the bullets decreased.

By comparison, below are the results of sizing once shot cases with a 0.002” larger bushing:

We intend repeating the above tensile tests using several cleaning methods and inside neck lube options. The objective is to achieve minimal variation of drawing force for each loading cycle, and also to reduce the standard deviation per cycle. Will this result in better accuracy downrange on paper? You tell us.

We are frequently asked to comment on the relative "head hardness” of different brands of brass. This would be a very large and expensive study if done thoroughly, because each piece of brass has to be sectioned and meticulously prepared for micro analysis. We have, however, done a "snapshot” of two brands popular with target shooters. We have just referred to them as "Brand A and B”. We selected one piece of virgin 223 Remington brass from each manufacturer, and asked Metlab to prepare and analyze the head hardnesses and geometry. As can be seen in Appendix 2 – 6.0 to 6.13, the head hardnesses are similar, given that there is actually a variety of hardness in different spots of the head.

The main differences appear to be dimensions, geometry and grain structure. The impact of those variables on case performance is not part of this study.

We believe they are both excellent brands.