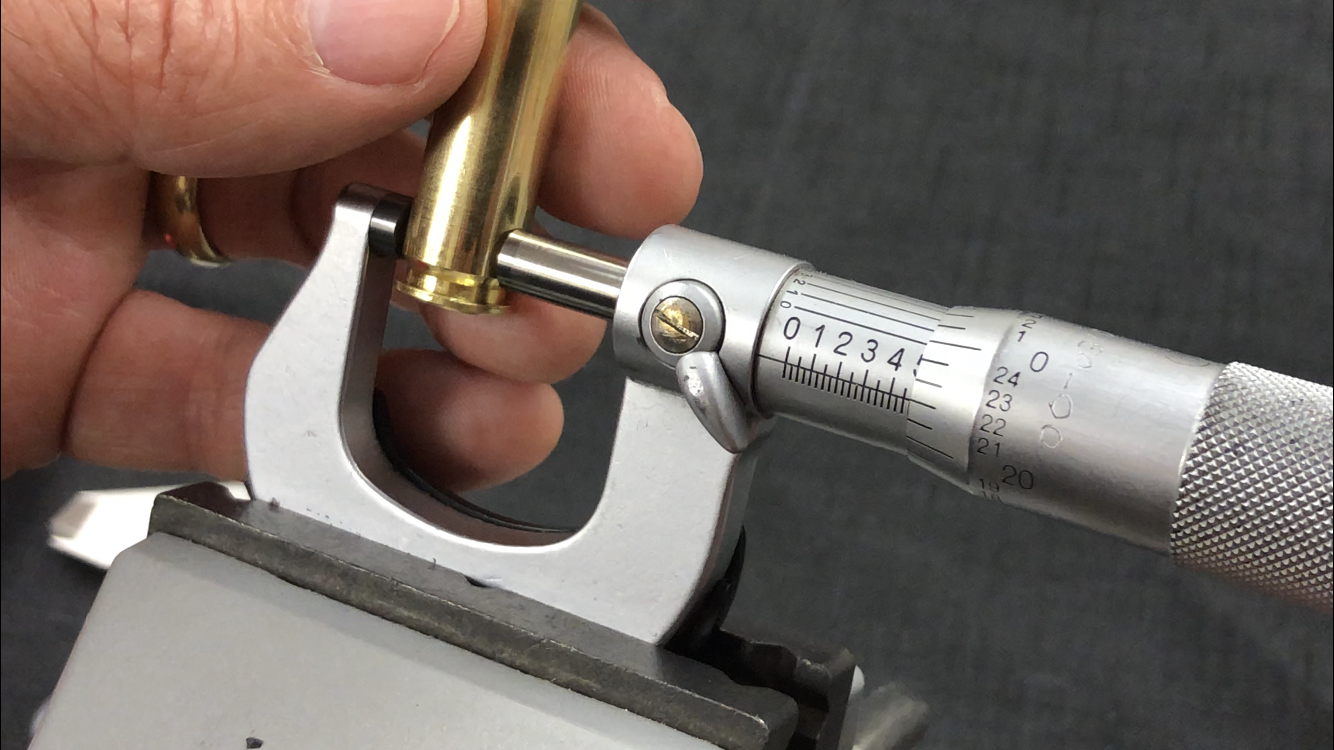 We have formatted this article as a combination of videos and data. Videos will introduce each stage, followed by data analysis. All raw data is available as appendices.

Testing was conducted at multiple venues in USA and also New Zealand. All annealing was done using Annealing Made Perfect Mark ll annealers. The exact, correct annealing settings for each of the various cartridges was established using the AZTEC mode of the Mark ll. The results shown in this article are only applicable if the AMP system is used for annealing.

We tested Peterson 308W cases for sizing consistency: 20 shots x 3 cases un-annealed and 20 x 3 annealed. Case necks were very lightly turned to remove any minor high spots. The turned neck wall thickness averaged 0.0147”. All cases were fire formed twice before "Shot 1” was recorded. A Redding full-length bushing die with an expander was used for all tests. The target for all sizing was a neck outside diameter (OD) of 0.335”, resulting in "neck tension” (Interference fit) of 0.002”. The target full-length sized shoulder "bump” was 0.002” from the fire formed dimension.  The rifle used was a Remington 700 with a standard SAAMI spec chamber. The full data for these tests can be seen here

As the brass in the case neck and shoulder gets progressively harder each reloading cycle, it will resist forming accurately to the sizing die dimensions. This leads to variable neck tension, and also variable shoulder bump when a full-length sizing die is used. The fundamental purpose of annealing is to eliminate "spring back” after cases are removed from the sizing die. 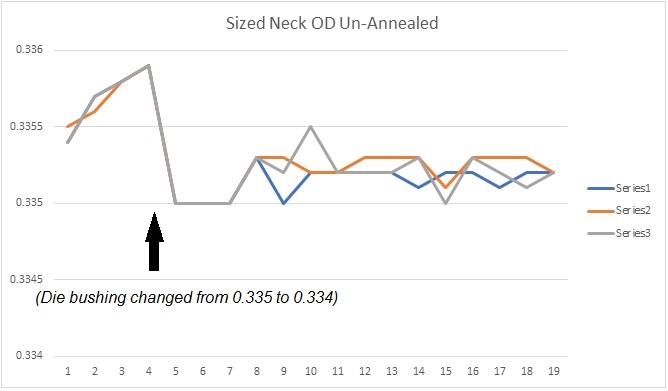 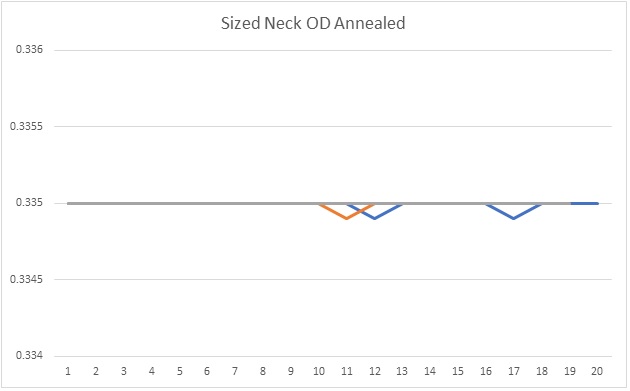 By comparison, the three cases which were annealed every reload showed almost perfect repeatability over 20 reloads. The neck OD remained at 0.335” for the entire test, with a variation of just 0.0001” observed on three measurements out of sixty.

This chart shows the progressive reduction in shoulder bump over 20 reloads. Because the reduction was expected, the die was adjusted to give an initial bump of just over 0.003”. By the twentieth reload, the bump had reduced to between 0.0005” and 0.0015” across the three test cases.

By comparison, the three cases which were annealed every reload showed excellent shoulder bump consistency with an average bump of 0.002” +/- 0.0005” over twenty reloads. We found that most of the observed variation was due to variable lubing of the cases. 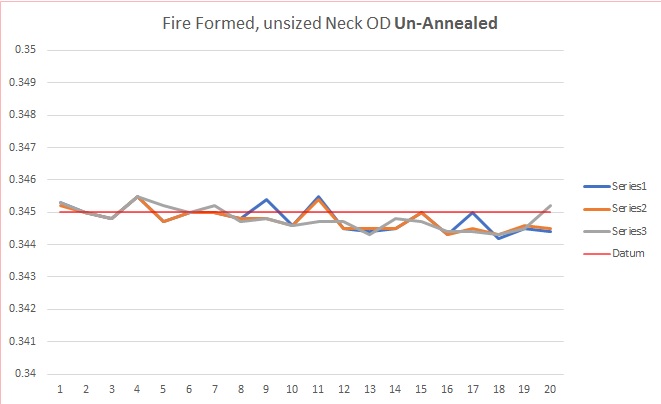 The next tests examined the unsized, fire formed neck ODs. This could potentially demonstrate if the neck and shoulder were providing a full chamber gas seal on firing. For illustrative purposes a datum 0f 0.345” is shown on both graphs. As can be seen above, the neck ODs progressively decreased fractionally over twenty reloads. By shots twelve and onwards, the average fire formed neck OD was down to 0.3445”. This may be significant in determining the effective chamber gas seal of the unannealed cases. 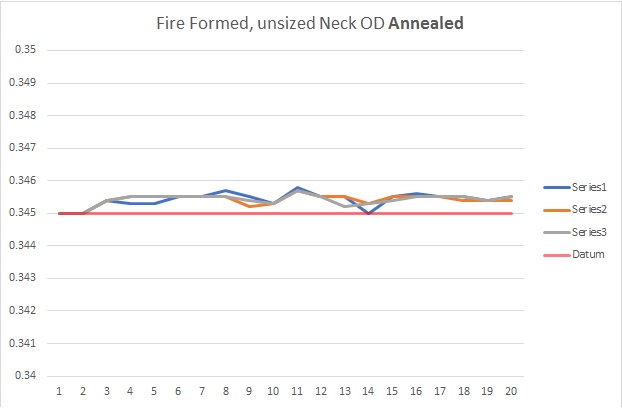 By comparison, the cases which were annealed every reload maintained a fire formed neck OD averaging 0.3455” over all twenty reloads. This may indicate that the annealed cases were forming a more effective chamber gas seal. This is a difficult subject to quantify, but it may partly explain the superior shooting results obtained with annealed cases which will be seen below in Stage Two and Stage Three of this study.

Case trimming to length: With this particular die set up we needed to trim the annealed cases more often than the un-annealed cases. We used an expander and a shoulder bump of 0.002”. Whenever one of the three cases of a set reached a length of 2.012”, all three were trimmed to 2.006”. Over twenty reloads, we trimmed an average total of 0.0225” from the annealed cases v 0.010” from the unannealed cases. The amount of trimming to length necessary varies with both the amount of shoulder bump and if an expander is being used. An expander tends to draw the neck forward. Many reloaders do not use an expander, and this eliminates this factor. In addition, the more bump, the more brass is extruded forward. Because annealed cases can be sized with excellent accuracy and repeatability, a bump of just 0.001” can work very well in bolt action rifles. This will reduce or even eliminate the need to trim to length.

Case life – potential head separation: These tests were originally intended to be to destruction i.e. case failure. After 2 x fire formings and 20 cycles of reloading of each set, the test cases are not even close to failure. This applies to both the annealed and unannealed sets. At the end of the tests we sent sample cases to Metlab (a local independent certified metallurgy laboratory) for sectioning and analysis. As can be seen in the photo below, there is just the tiniest sign of case wall thinning above the head. While the unannealed cases may eventually fail due to neck splits, we believe the annealed cases will last much longer. 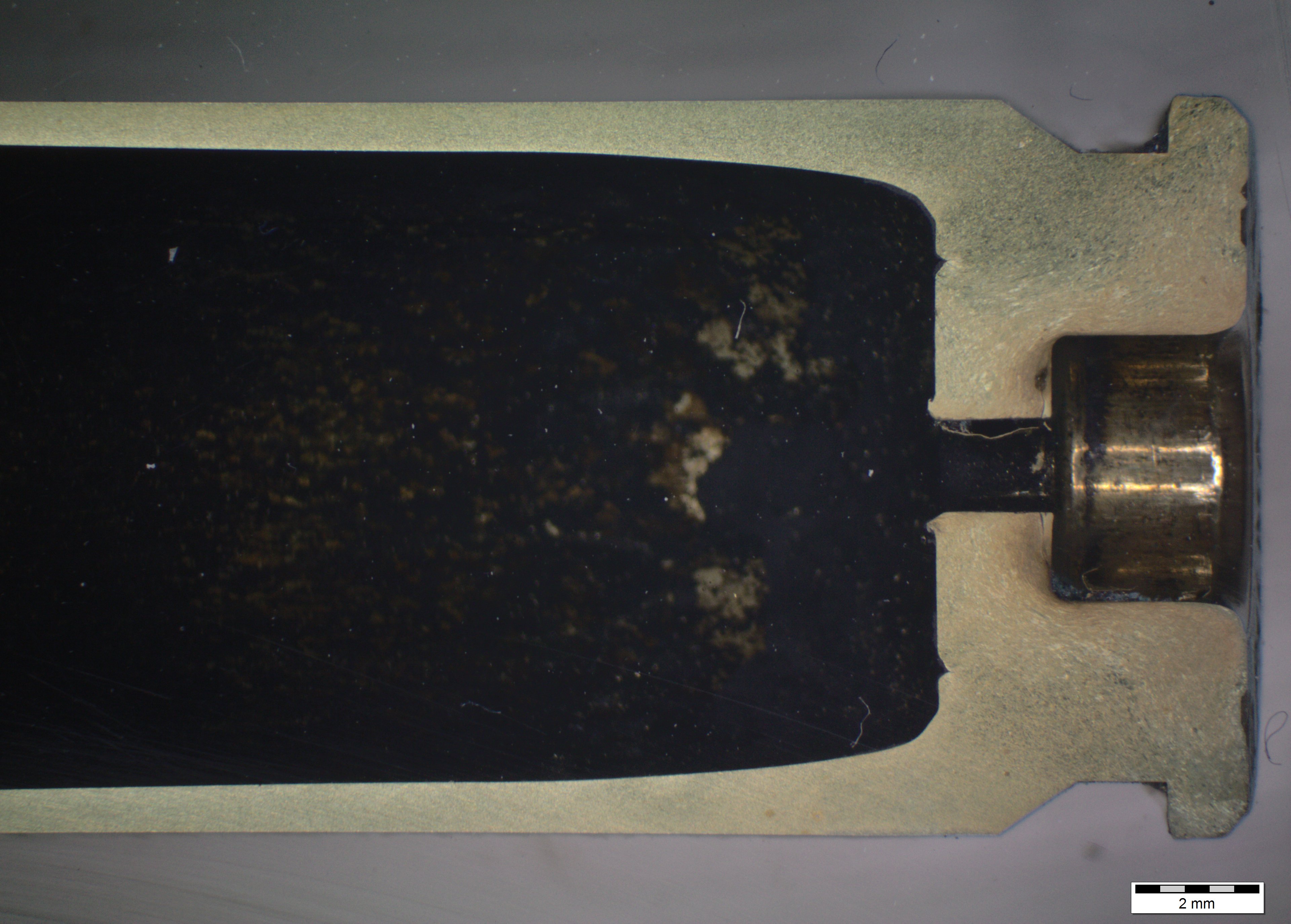 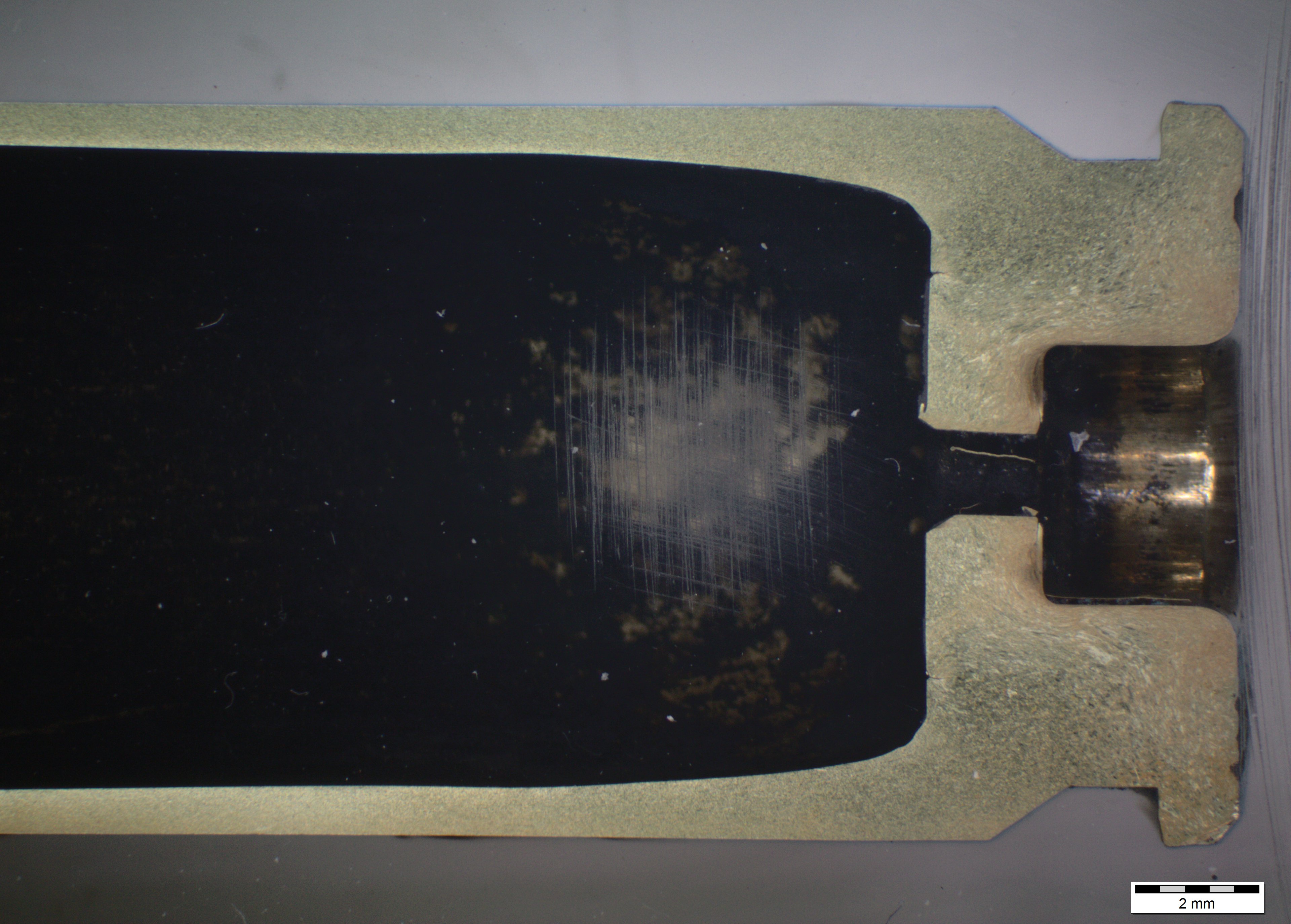 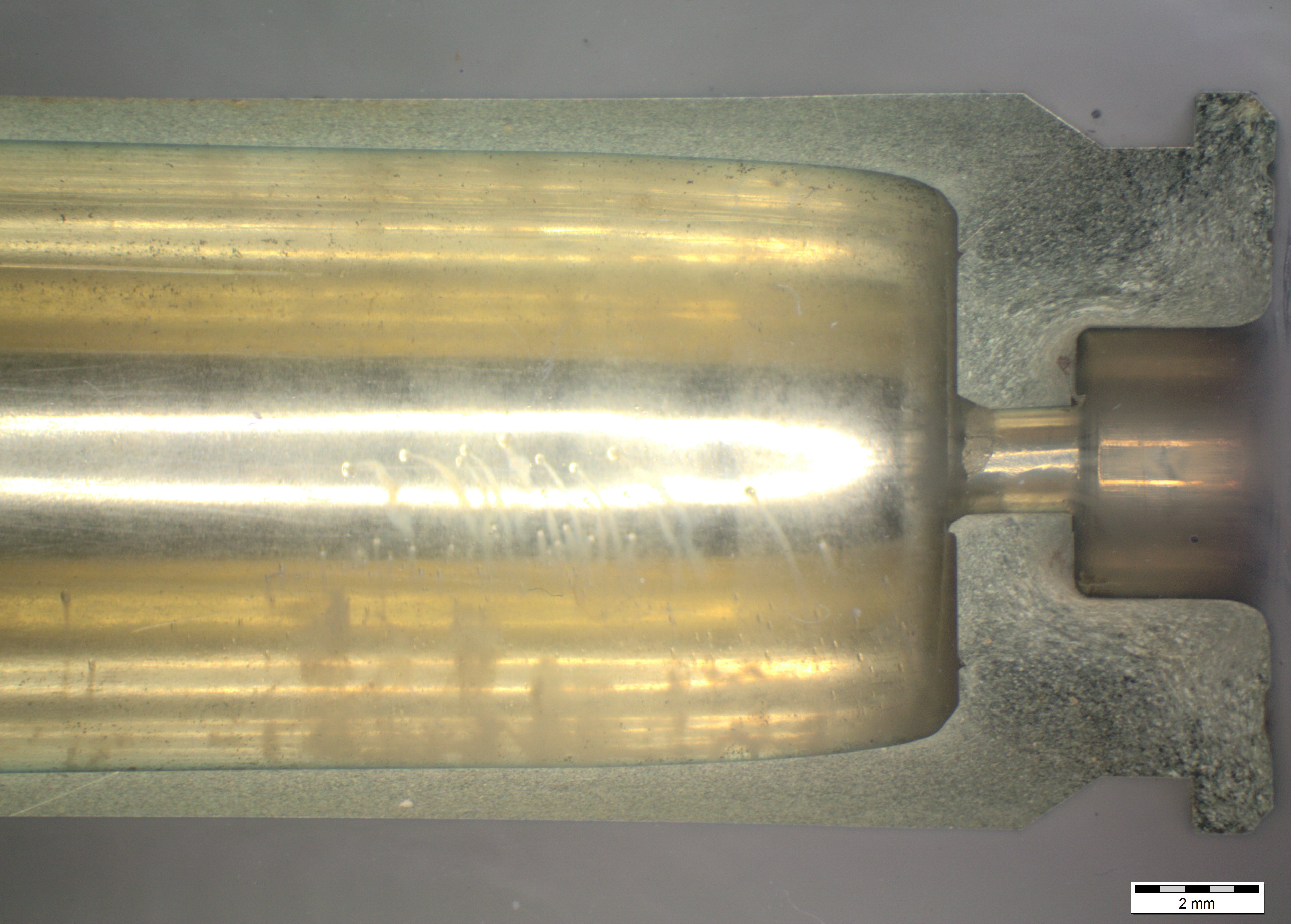 This is in contrast to a destruction test performed by Greg Micklow, who was part of the Strategic Edge team of testers in Tennessee. Greg was using the same Peterson 308W cases, and a stock Sako TRG22. The difference between our testing and Greg’s is the sizing die used, and the frequency of full-length sizing. Our testing full-length sized every reload, with a nominal shoulder bump of 0.002”. Greg was neck sizing only, with a Lee collet die until chambering a round became tight. At that point he used a Redding body die to full length size the case. Body sizing was done on both cases after the sixth reload and the twelfth reload. It would appear this technique placed much more stress on the vulnerable case wall area ahead of the head.

The above study illustrates that there is a clear advantage to annealing cases every reload with the Annealing Made Perfect system. These advantages are:

Stages Two and Three will test if that dimensional uniformity translates to real world improvements in groups and velocity extreme spreads.