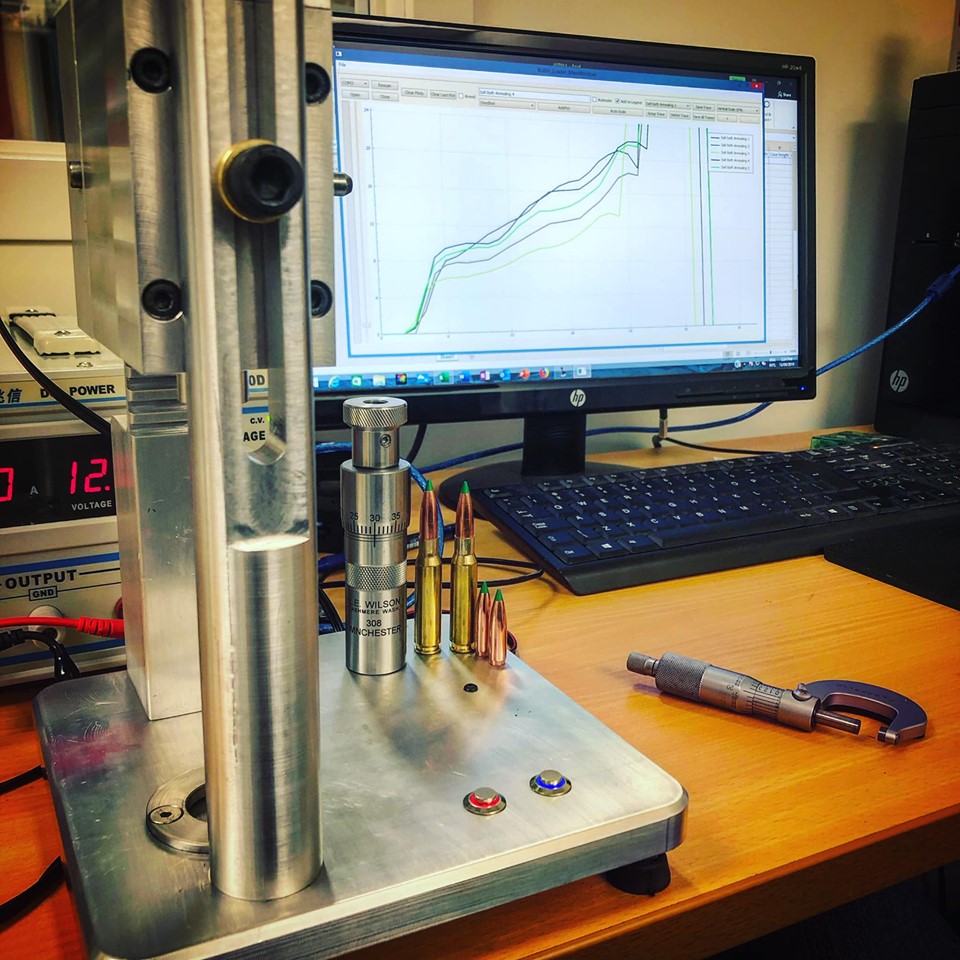 Special thanks to Lou Murdica and Stuart Elliott.

Matt and I are indeed fortunate to have such great mentors.

What exactly does annealing do?

Why should every reload be annealed?

Each one of these processes work hardens the neck and shoulder of the cases. This hardening creates spring-back from the sizing die, which in turn affects the accuracy of sizing. The harder the brass the greater the spring-back. Work hardening occurs much faster than is generally perceived.

It is widely known that regular annealing extends case life. In fact, the neck and shoulder of cases annealed each reload and shot in a bolt action rifle will generally outlast the rest of the case. The greater benefit of annealing however, is enhanced accuracy.

Annealing correctly every reload prior to sizing eliminates spring-back out of the die, and ensures that each case is sized identically every reload.

It also ensures that on detonation, an effective and repeatable gas seal is formed by the neck and shoulder of the case in the rifle chamber.

Inaccurate sizing and variable chamber sealing can and will affect the accuracy of reloaded ammunition.

Measurements recorded each cycle were:

In addition to recording the above dimensions, the force required to seat each bullet was analysed using an LE Wilson in line seating die and an automated ram positioned on a pressure cell. These results were recorded in graph form.

As will be seen both dimensionally and also by measuring seating force, failure to anneal results in progressively less interference fit (neck tension) each reload if no expander is used. It may seem counter-intuitive, but even using a die with expander, unannealed cases also show a progressively increasing neck OD as the necks harden. In addition, the shoulder bump dimension of unannealed cases tends to grow each reload, as the hardened case springs back out of the die.

Here is a video demonstrating the Bullet seating press with load cell in action:

The two biggest factors which affect the seating pressure plot lines are interference fit (neck tension) and inside surface condition of the neck. As can be seen, just brushing out residual carbon makes a big difference. Seating depth also affects the seating pressure trace. We are yet to experiment with inside neck reaming and moly coating. 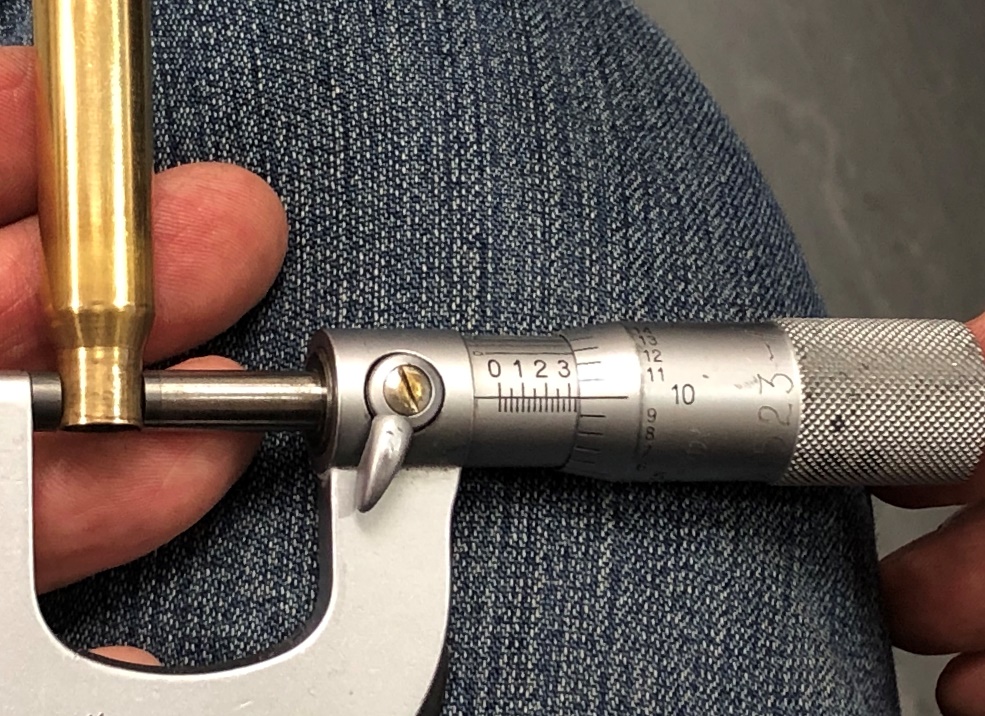 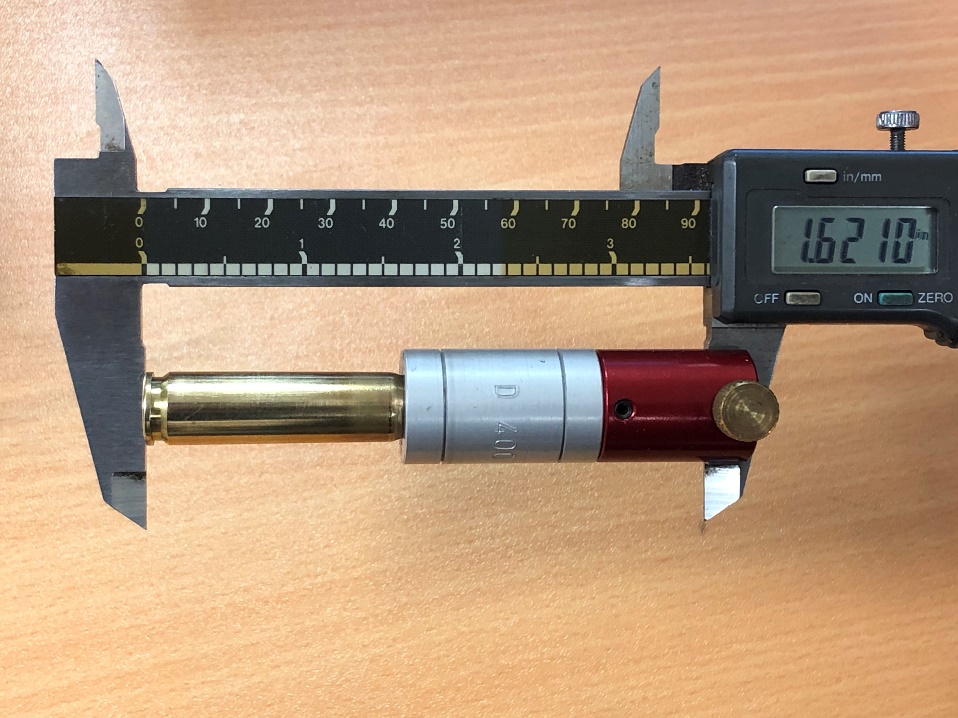 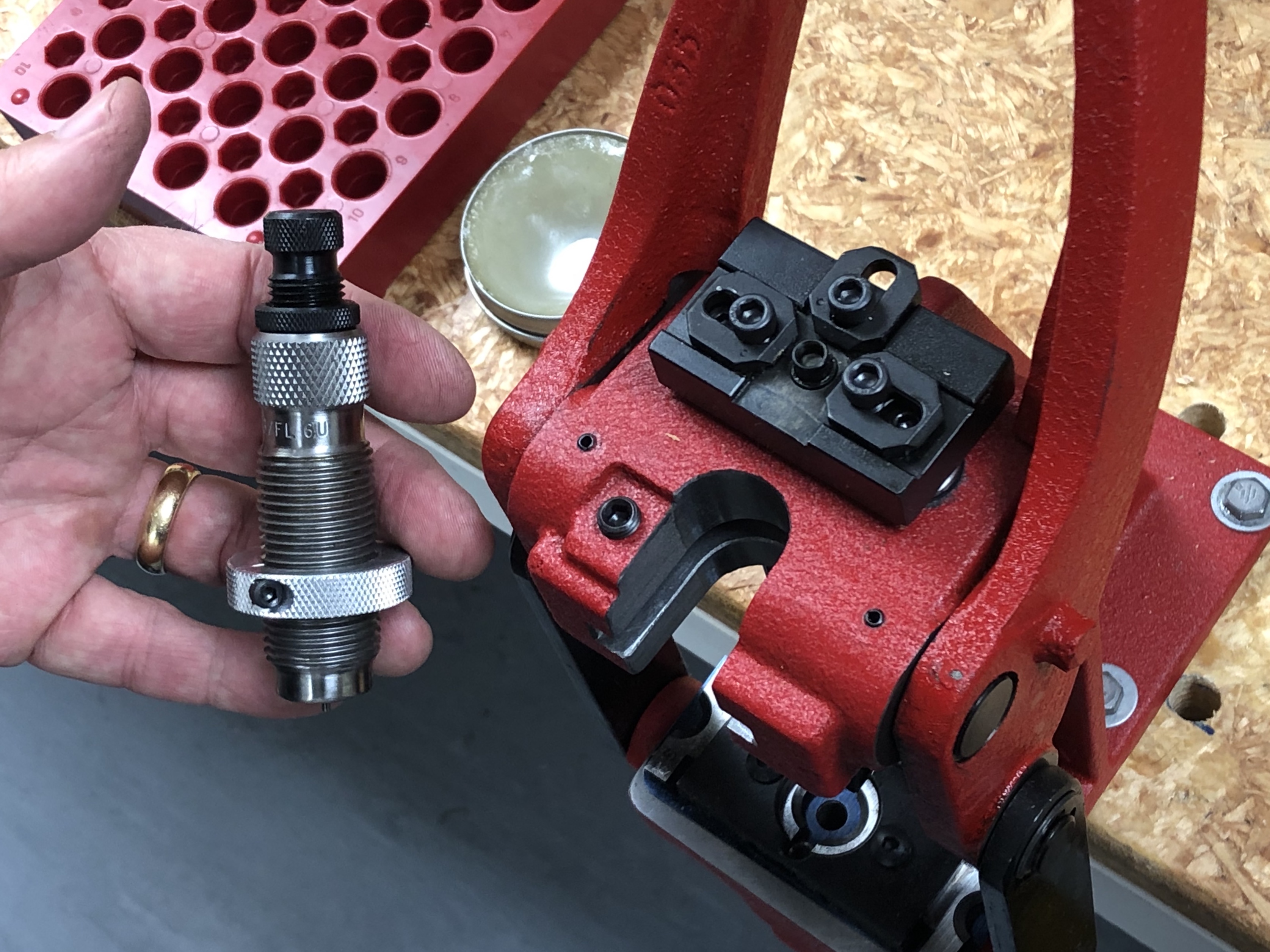 Note: the purpose of the load was purely to fire form the cases each reloading cycle. No attempt was made to optimize the load for accuracy. That will be done in the next study.

Cases: 308W Peterson large rifle primer Match and 308W Lapua Palma. Peterson cases were used for all of the tests shown below. We also ran many preliminary tests with Lapua cases.

Seating depth (except where specified) 2.3285” measured to ogive datum.

Both Peterson and Lapua cases were lightly neck turned to 0.0142”. This was just sufficient to remove any high spots. All cases were shot and annealed twice from Virgin. Each test started with a correctly annealed case.

The Redding FLS die was set to shoulder bump annealed cases from a fire formed length to datum of 1.6235” down to a nominal 1.621”, or 0.0025” bump. This same setting was used for all tests, enabling any variations to be seen. Note: we did observe some variation in the initial shoulder bump from test to test.

The inside of all necks were brushed with a dry nylon brush prior to seating.

No annealing with no expander. 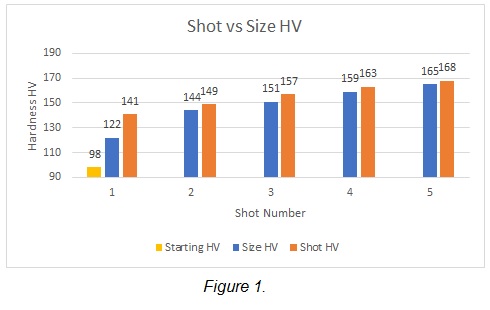 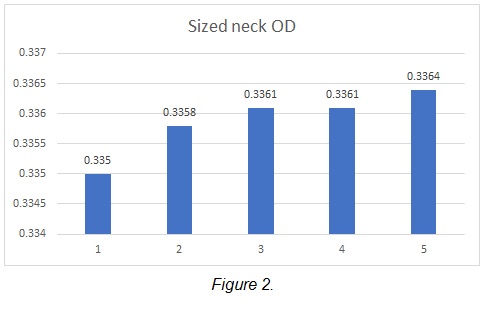 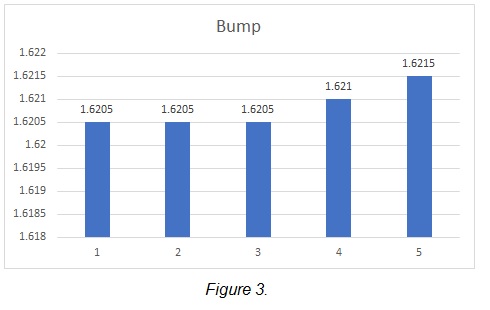 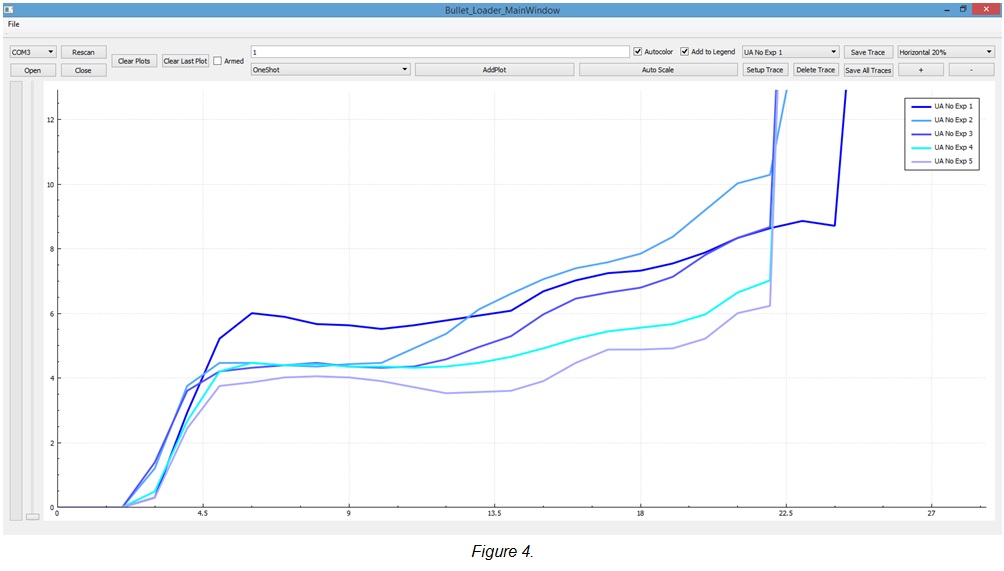 Figure 4 shows the effect increasing neck OD had on bullet seating pressure. As the OD increased, seating pressure decreased. As shown above, shot one had 0.002” neck tension, whereas shot five had less than 0.001”. 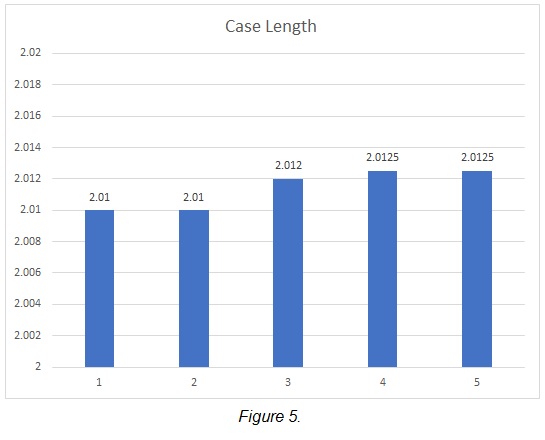 Annealed with no expander. 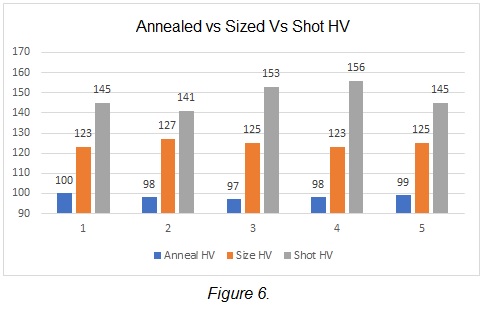 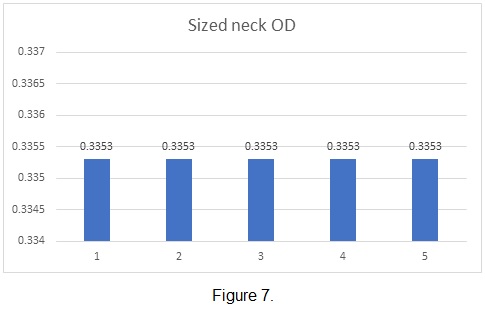 Figure 7: shows the benefit of correct annealing in neck sized accuracy. Every reload the neck OD was identical at 0.3353”. 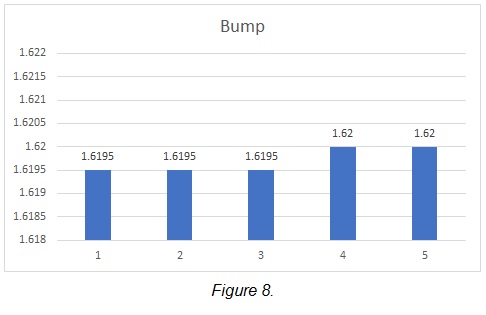 Figure 8: shows the benefit of correct annealing on accurate shoulder bumping. The first three sizings gave 1.6195”, while the fourth and fifth were just 0.0005” larger at 1.620” 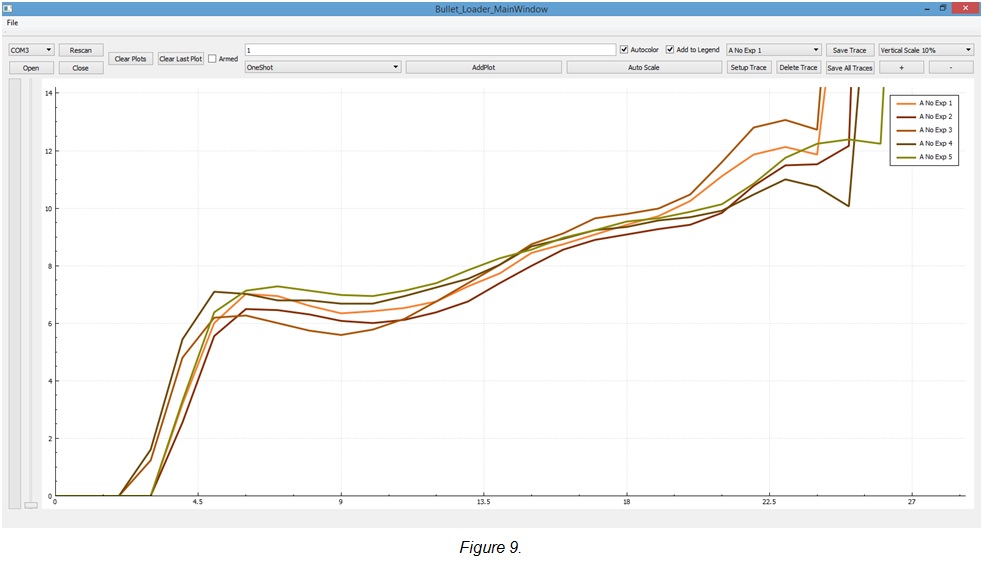 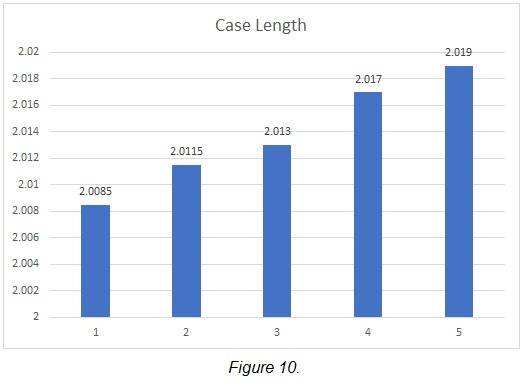 No annealing with an expander. 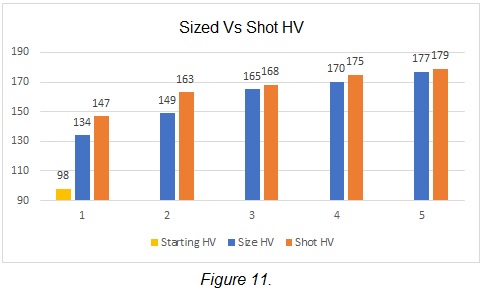 Figure 11: shows even faster neck hardening than Figure 1, which had no expander. This is because the neck is being work hardened twice with each sizing, once by the die at the top of the stroke, and again by the expander. 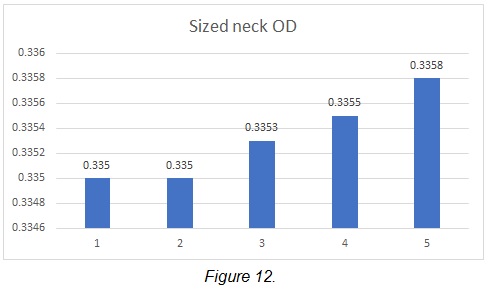 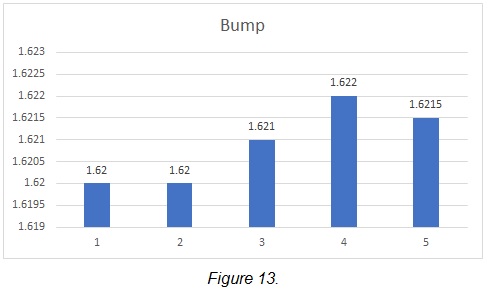 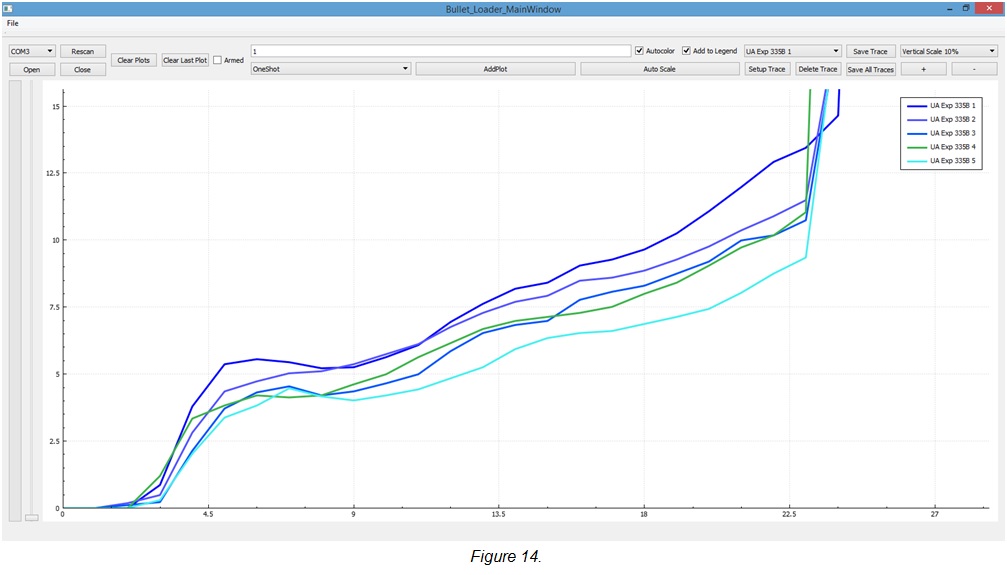 Figure 14: shows the effect of inconsistent neck OD on seating pressure. As with unannealed cases without an expander as shown in Figure 4, as neck OD increases, seating pressure decreases. 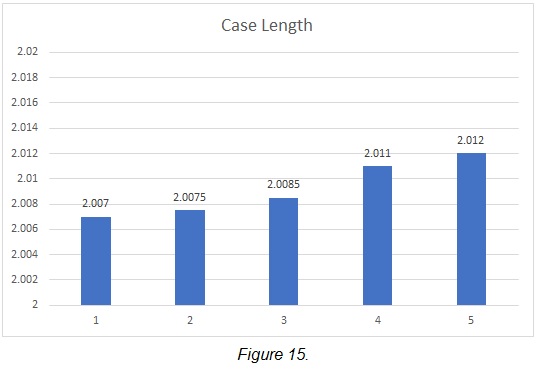 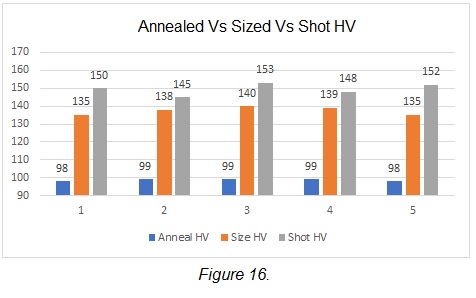 Figure 16: shows correct annealing each cycle as was shown in Figure 6. While the cases work hardened more each cycle due to the dual action of the expander, annealing brought the neck and shoulder back to the correct hardness so that the case sized to accurate dimensions each cycle. 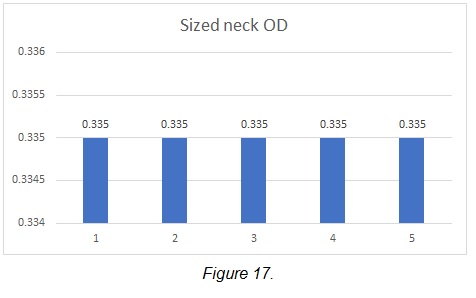 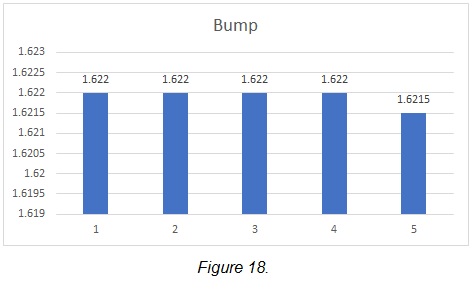 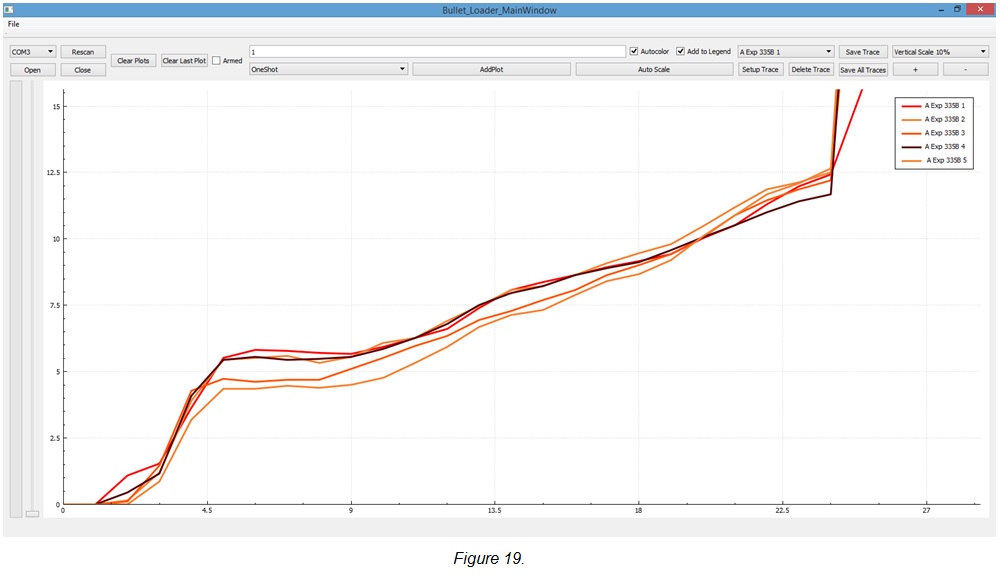 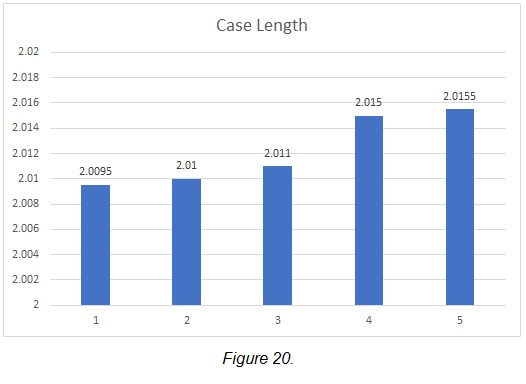 Figure 20: shows case length growth from 2.0095” to 2.0155”, a growth of 0.006”. Clearly the expander caused increased case length in both annealed and non-annealed samples compared to sizing without an expander.

We believe the above tests clearly demonstrate some of the benefits of accurate annealing. Precision and repeatability of sizing is greatly enhanced. This is evident when sizing either with or without an expander in the sizing die. Overlaying the bullet seating pressure graphs also shows a marked improvement: 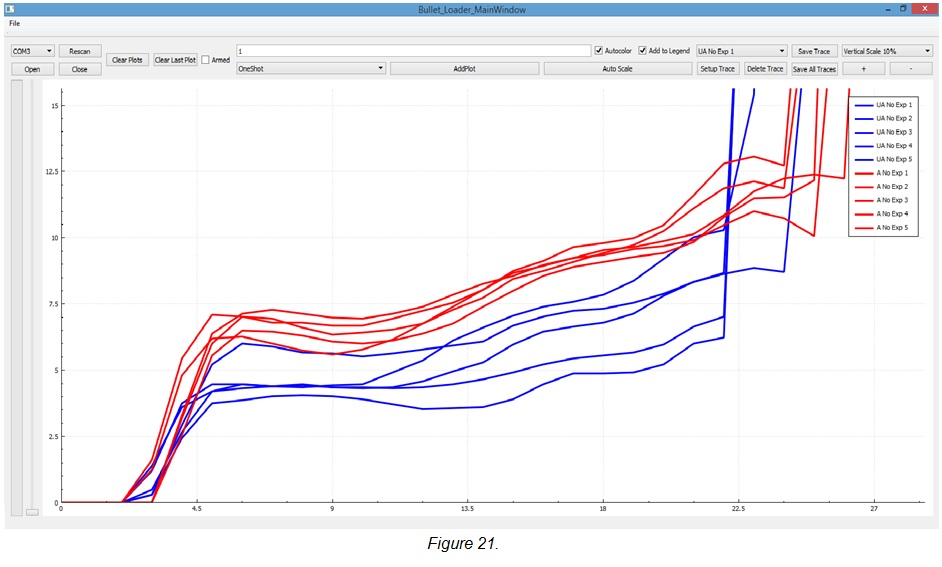 Figure 21: shows results using a bushing die with no expander, Annealed traces are in red, unannealed in blue. 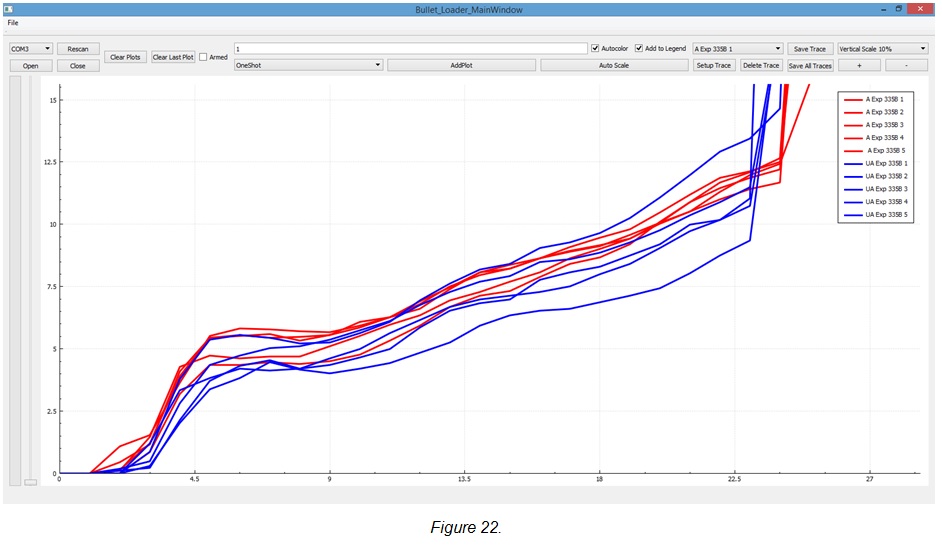 Figure 22: shows the results out of the same die with expander added. Annealed traces are red, unannealed in blue.

We will continue to experiment with different inside neck treatments to see what provided the ultimate consistent bullet seating pressure. We will also test inside neck reaming. Results will be added to this article.

As mentioned in the executive summary above, another benefit of annealing is improved sealing of the chamber by the case neck and shoulder on detonation. This is much harder to quantify, but it can be illustrated with this example. 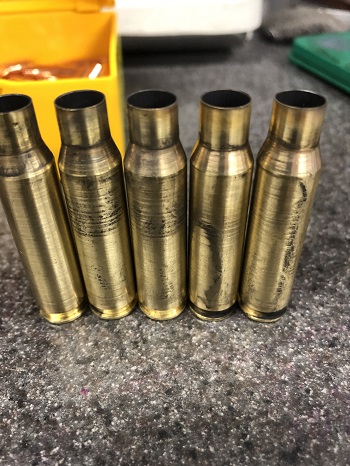 The 308W cases above are part of the testing done by Lou Murdica recently. We will refer to them as "Brand X”. They were shot with a very hot load. The cases in the above photo were unannealed from virgin brass. From the fourth shot on they exhibited gas leakage. 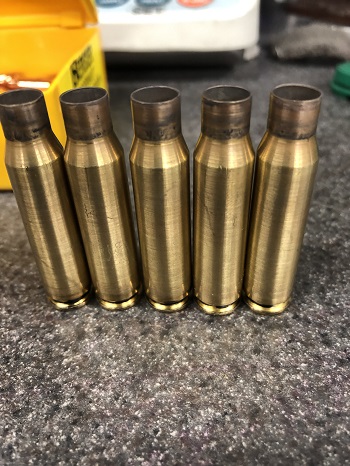 These cases above are the same brand shot with the same load the same number of times. They were annealed each reload. No gas leakage was experienced. We will be doing ongoing research on this subject.

A final note: The above testing took a lot of time and effort. Below are the empty containers of the consumables we used in the testing. We know that a lot of shooters might go through this much or more in a single day. However, bear this in mind. Every single shot we fired was analysed for dimensions and hardness multiple times, and then recorded. That is a lot of work. 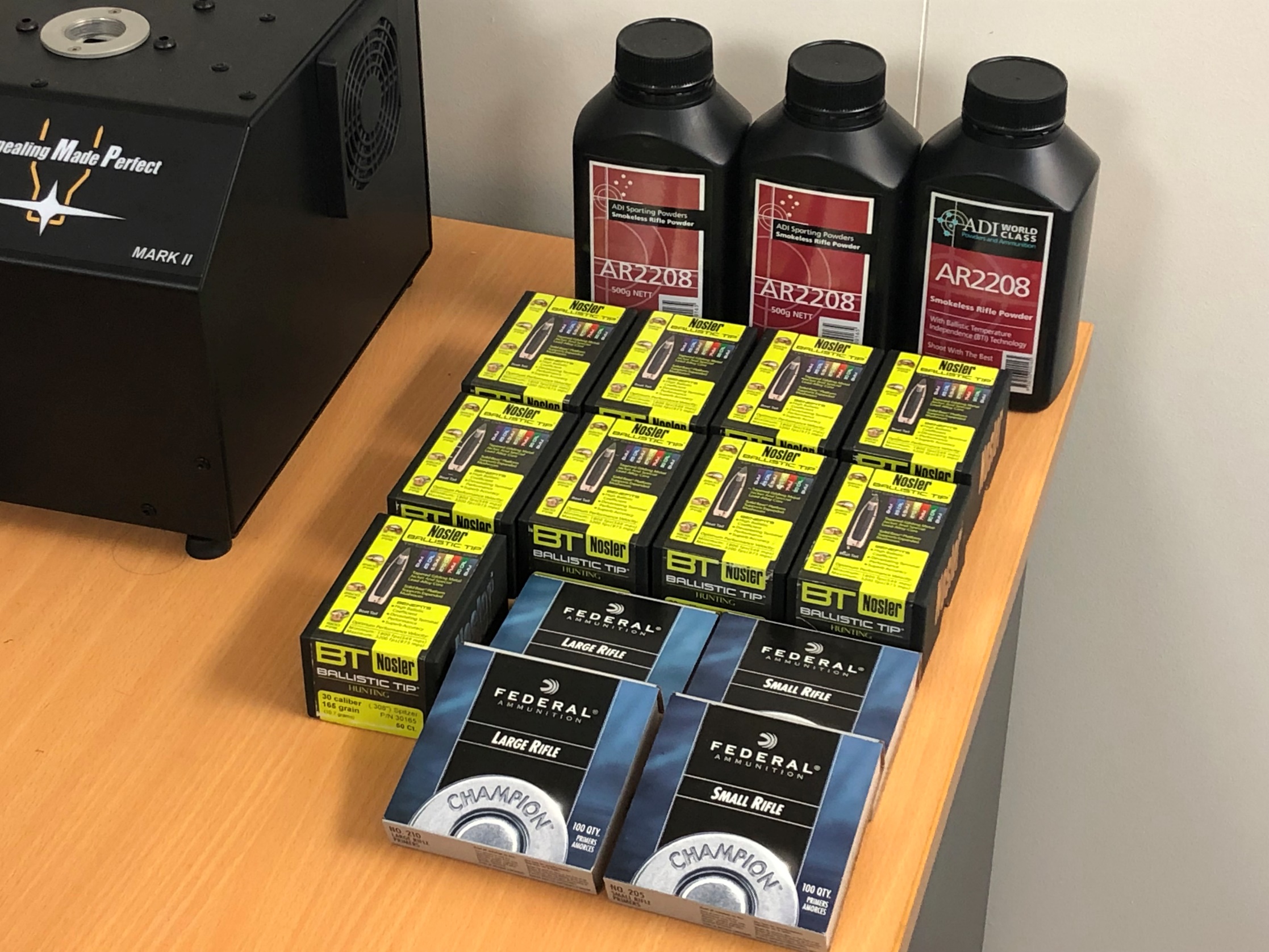 We are not finished yet, work has already started on "Annealing under the microscope Part 5". It will focus on the real world benefits of all this precision. What difference does it make down range?